"Or again, how can anyone enter a strong man's house and carry off his possessions unless he first ties up the strong man? Then he can rob his house." -- Matthew 12:29 (NIV)

The illustration Jesus is making in this verse is on another topic, but my mind is particularly haggard this day. This verse came driving into it, when I heard of the tragedy at Sandy Hook Elementary School. The authorities will be deep into the investigations of how this could happen. "Liberals" will stir up questions about gun control. "Conservatives" will chant about how guns don't kill people, people kill people. 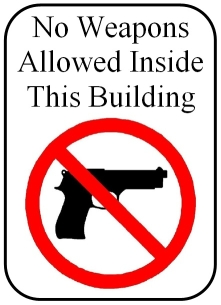 We have all seen this sign. It appears on doors of shopping malls, stores, and schools all across the country. What does this sign say? To law-abiding citizens, it says, "Don't bring your gun in here."

To a nut looking for what law enforcement calls a "soft target," it says, "Here's your kill zone." These guys may be nuts, but they're generally not stupid.

My point is not to be pro- or anti-gun. I'm a gun owner who happens to support some gun control. Our problem isn't too much or not enough gun control. The problem is, we've gotten stupid about it. We have become so worried about guns in this country that we have tied up the strong man. At the same time, the Church is absent. Oh, the Church is there after the tragedy, offering hope and comfort. But before it happens-- Well, more to come....

For now, my prayers are with the people of Newtown Connecticut. May the Lord and His people comfort and lift up those who have suffered such loss.
Posted by Unknown at 2:57 PM