Many in the family have heard about it. We toss it around in our conversations, and try to make jokes about it. I usually say it's good luck to break a mirror, while walking under a ladder, with a black cat weaving back and forth in front of you. 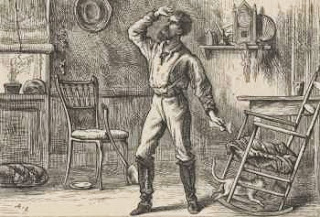 But it's no joke. The "Haggard curse" is very real.

The first instance of it that I remember came when I just a kid. It came not long after Dad made the decision to go into the ministry. While driving, he passed a slower car on the highway. When he pulled back into the right lane, he was just a bit slow in getting back over. His left front tire crossed the first foot of the next no-passing zone line. A police officer was right there. He pulled Dad over, gave him a ticket and a lecture, and actually forced Dad to go directly to the court to pay his fine.

Yeah, I know. A general traffic trap. But even for one of those, just a bit too coincidental in its timing.

I've seen such strange occurrences to many in the family. And there is one very particular coincidence to them. They happen to Haggard family members and relatives ONLY when they are involved in acts of faith that can bring about great, positive changes. And the greater the possible changes, the more vicious is the "curse."

Dad's last one, the most powerful against him, brought his heart to a stop. But for a reason even Dad didn't completely understand, he was moved to walk to the hospital Emergency entrance, just before it hit him. It's pretty clear now how he was moved to walk across the lot to the doctors.

I've had several, too. They started right after Cheryl and I decided I would go into the ministry. After paying our rent, I stopped my '74 Chevy Laguna at a stop sign. I looked right, and three blocks away I saw a Fiat coming. I looked left, and it was clear, so I started to cross the intersection. The Fiat was 1500 pounds lighter than the Laguna, but it hit the Laguna so hard that it knocked the big car sideways into a power pole. With so much force that it knocked the rear axle completely out of the car.

From then on, when we lived and worked where we could do great ministry, we were cursed. Unexplainable accidents. False accusations. Personal complaints. When we lived out in sparse places, like the far west edges of Nebraska and Kansas, we had great peace. The last and worst curse instance was when I was accused of having a sexual affair with a woman in the church, and attacked by the elders. Turned out it was one of those elders who was having the affair. But our hearts were so broken, we left ministry. I got a job with Microsoft.

I've been making a good living ever since. I haven't been much satisfied, though. It took two major crashes to get me off the motorcycle and stop ministering to outlaw bikers. And those were also timed just before we were set to travel to care for widows.

Now finally, as my heart was being pulled back to ministry, a fast-growing tumor appeared in my head, of a type that isn't ever discovered until it's too late.

In every instance, Cheryl and I have survived, and come out well. How well should one be after hitting a deer while riding a motorcycle? On I-70? At 75 mph? Pulling a trailer?
A tumor too small to cause symptoms did just that. So small that a surgeon of God's assured it's gone, without a trace. And to top it off, feeling great at the time when follow-up treatment is supposed to be at its worst.

Our main problem was that we didn't really see what was going on. God allowed Job to be attacked by Satan. It ultimately raised Job higher than ever, and glorified God and His kingdom. God has allowed me (us) to be attacked, knowing that, sooner or later, we would finally learn to stay by His side, and depend always on Him, and follow his lead, and love Him more than anything else. Even more than each other.

Therefore take up the whole armor of God, that you may be able to withstand in the evil day, and having done all, to stand firm. Stand therefore, having fastened on the belt of truth, and having put on the breastplate of righteousness, and, as shoes for your feet, having put on the readiness given by the gospel of peace. In all circumstances take up the shield of faith, with which you can extinguish all the flaming darts of the evil one; and take the helmet of salvation, and the sword of the Spirit, which is the word of God, praying at all times in the Spirit, with all prayer and supplication. (Ephesians 6.13-18)

All those things we're supposed to put on? From God Himself. And stand where? By His side. And whose power and authority? His alone.

The Haggard curse is over, at least in this branch.
Posted by Unknown at 2:12 PM